We have had the privilege to present modern blues artists in the beginning of their career, artists who today since then risen to be some of the prominent stars on the southern soul scene. Karen Wolfe, Mr. Sam and Sweet Angel. Now we come to Jaye Hammer. We first noted him on an Ecko compilation CD. Earlier this year, his full-length album was released, which we considered among the best in the genre. As with almost all artists today, even he got his start in gospel music. It will be interesting to follow his career. /Anders Lillsunde

Interview by Mike Stephenson took place at the artist’s home in Friars Point, Mississippi in September 2012. Many thanks to John Ward of ECKO Records for his help.

Could you start off by telling us about your early years?
I’m Jaye Hammer, a new artist from ECKO Records, and I was born in Friars Point, Mississippi and I got into the blues when I was about eighteen years old. I recorded my first album which was titled ‘Work It On Me’ under Blues River Records whose CEO is Mr. Aaron Weddington in 2002. It was recorded in West Memphis in Arkansas. From there on, in 2011 I signed with ECKO Records under the leadership of John Ward. My actual name is Jeremy George and I was born September 1st 1981. My mother’s name is Dorothy George and my father’s name is Lorenzo, and to go on a little further, I have been married to my beautiful wife for nearly two years and I’ve got three beautiful children. My grandfather who is now deceased, they say he could sing, but I don’t have a lot of memories of him. I have an auntie who lives in Washington and she sings a little and she has a Mahalia Jackson type voice.

How did you connect with John Ward and ECKO Records?
Actually I had known John Ward for a while and the CEO of Blues River Records, who is now my manager, Aaron Weddington we went up to see John and we sat down and talked and let him listen to some of my music and then he was interested in signing me to a two CD record deal. I recorded my latest CD titled ‘Hammer’ at the ECKO Records studio in Memphis and I wrote about four or five songs on that album, one of which is playing really well titled ‘I’m Leaving You’; and I wrote ‘I Thought It Was Jody But It Was Judy’, and others. The airplay on that album is real good and the album is selling really well. I’ve done many radio interviews since the release of that album. My first album ‘Work It On Me’ did pretty well for a short time and the title track did really well for me. But that album has now died down. I wrote some of the numbers on that CD like the title song and ‘I’m Sorry’ and ‘Stepping Out For Love’.

Before that first CD what were you doing?
I discovered I could sing when I was about nine years old and I did my first solo in the church I belong to, which is Friendship Missionary Baptist Church under the leadership now of Rev. Robert Watkins, and that’s here in Friars Point. The pastor when I first started was Rev. Marvin K. Miles and I was basically singing a lot in the church back then, and how I got into the blues was Mr. Weddington. He came one day and saw me and from there on he wanted to do a record on me. At that time I was only fourteen years old, so my mother didn’t mind me doing the record but she wanted me to finish high school and graduate, and then after that she said I can do what I want to do. I started off travelling with label mate O.B. Buchana and another good friend Nathaniel Kimble. I was travelling with them and through that I met other artists like Ms. Jody, David Brinston, and more recently I have been working with a guy out of Memphis called Sonny Mack.

When you say out on the road with these other artists, what does that mean?
I’m on some of the shows with them, we work together in the studios together, recording and writing and things like that.

Do you play any instruments?
No I’m just a singer. I did try to learn keyboards some years ago but I couldn’t get my fingers together so I kinda left that alone.

Are you still involved with the church?
Oh yes I always keep God first in everything I do because without him there is no me. I still sing in the church. I used to be in the choir in the church in my earlier years, but now I’m just a solo singer within the church. I try to go every Sunday as best I can.

With the blues thing, are you getting out on the road playing in clubs?
I have done a lot of festivals and I have done some clubs, but mostly I do festivals. I have played at the Sunflower Blues Festival in Clarksdale and I’ve been on there two years straight. I’ve travelled to Oklahoma and all up and down the Alabama and Louisiana areas, Baton Rouge and Mobile, and in the Mississippi area also. I’ve performed in Memphis at the Executive Lounge, the Top Hat and others. I have performed at Ground Zero in Clarksdale. I’ve been on stage with Lee Shot Williams, Sir Charles Jones, T. K. Soul, O. B. Buchana, Billy ‘Soul’ Bonds, Willie Clayton, Clayton Knight, Ms. Jody, Jackie Neal, Sir Jonathan Burton, Wendell B., Stephanie Pickett and I’ve been out there with some of the best. I never got a chance to perform with Johnnie Taylor and Tyrone Davis and Marvin Sease, although I would have loved to.

Since being with ECKO Records, has that helped raise your profile?
ECKO Records have done a wonderful job for me and I thank John Ward and Larry Chambers, they are good people. The promotion is going good, as is the airplay.

Are you preparing songs for your next CD on ECKO?
I’m actually still working on my last CD with ECKO, and maybe I have about five songs that I have to complete for the new CD, and the release date is early in 2013. I’m working with Sonny Mack in the studio together, writing and recording, but I’ve not had the chance to be on stage with him as yet. Everything Is going good for me at the moment with my career. At ECKO we all know each other. My very good friend is O.B. Buchana, we visit each other a lot. I have been to his house and stayed nights and we have worked on material and we hang out together, and another artist who is a good friend is Nathaniel Kimble. It’s all like a big family thing.

Do you have your own band?
My band is called Total Package and they are out of Memphis and they are a four piece. They have played for O.B. Buchana, David Brinston and they started out playing for Ms. Jody, although she now has another band.

You mentioned that you are blind.
I’m blind. I went blind in 2007 at the age of twenty-six. I have detached retina. I have had about four surgeries on my eyes, but it went from good to not so good. So far it hasn’t been stopping anything though, regarding my music. 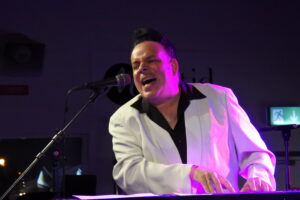 Interview in English with Mike Sanchez