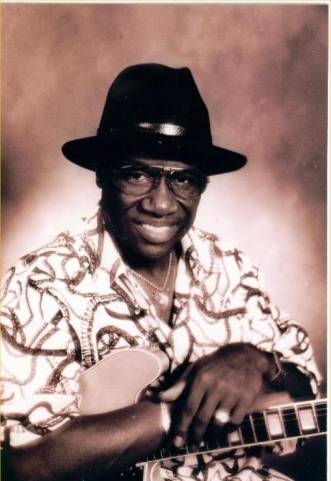 This interview is with one of Texas finest, and original blues bandleader and musician, Henry "Blues Boy" Hubbard. I met Hubbard at the Hyatt hotel in Austin, TX, during an event to help raise money for one of Austin's oldest homes of the blues, the Victory Grill.

So many greats like W.C. Clarks, Gatemouth Brown, Bobby Bland, Ike and Tina Turner and "Blues Boy" Hubbard were among many of the artists who frequented the Victory Grill and other Eastside blues establishments during the 50s and 60s. When integration came about during the 60s, several young white musicians started coming to the eastside bars to play. Hubbard quickly became one the instructors and influences for this new group of players. One such musician who was influence by Hubbard was the late great "Stevie Ray Vaughn." Hubbard is known for his great blues instrumentals and has been said to have succeeded T. D. Bell as the leading guitarist of his generation.

Henry "Blues Boy" Hubbard was born in La Grange TX in 1934, and started playing music at the young age of 8 years old. He did not start off doing guitar, but started off playing the piano, and by age 12 his mother had sent him to a teacher to learn how to read sheet music. Eventually, Hubbard went on to join the United States Air Force as a jet mechanic at Bergstrom Air Force Base in Austin, TX.
After the military is when he began to play clubs and gigs with his band The Jets. He does not really play much anymore, but is still around Austin, and did play for this particular event.

Q. How does it feel to be up here with Bobby and Gary Clarke again?

Q. How do you feel about the current blues scene right now?

A. Well, it is pretty good, but at the same time, the young people really do not play blues. A lot of them now are rapping or playing rock. It is about to fade away, but I do not think it ever will truly burn out. The fire may burn really low for a while, but then someone like Bobby Blue Bland will come along and bring that fire back up again.

Q. How do you think the turn out was tonight for the Victory Grill's fund raising event?

A. I think this is really going to help out the Victory Grill. It is one of the sites left where people can still play the blues, because Charlie's Play House where I was the house band for is gone now. Ernie's Chicken Shack is still around, which is nice. It would be a shame to lose something like this.

Q. So who were some of the people that you were able to open for in the past?

A. Well, Bobby Blue Bland of course, but also T-Bone Walker and Gatemouth. I basically was able to open for anyone who played for Charlie's Playhouse and Ernie's Chicken Shack. I played, along with my band the Jets, at these places for 20 years. We would play during regular hours, as well as after hours. There was this radio DJ named Tony Barnes who never seems to get any credit, but he would play songs by all the black artists in central Texas (Austin.) Then, he would book the star, not the entire band, but the lead singer to perform, and we would be the band. This way, it would be much cheaper to just pay the star and not the entire band. Sometimes, we would even play at the Harlem Theater on Saturdays during intermission while they would be getting the movie set up again. We would also play at fraternities, and while doing these gigs, Charlie would have Jean & The Roulettes play in place of us. See, Charlie's Playhouse and Ernie's Chicken Shack were the only clubs that would have the white college students in on Fridays and Saturday nights, and this was how they made so much money and business.

Q. Are there any albums that fans of your music can look into?

Q. What advice or insight would you give to someone who may want to go out there and play decent blues music?

A. Well, see with that, it all depends on what style of blues a person is wanting to play. You have the styles of T-Bone Walker, but then you have the styles of Muddy Waters and Lightnin' Hopkins. So it all depends, like Gary Clarke is getting a little bit of both sides by playing, you know, sort of the rock blues. Then he goes on to play more funky stuff with his acoustic guitar. It is good he is going both ways, which means people will not be able to miss him.

Q. Who are some of the current people on the scene that you enjoy listening to?

A. Well, a lot of the things currently I do not listen to. There are not a lot of new groups out there that I do not listen to anymore. They all seem to be rapping now. Gary O'Brien is always great to see, and Jimmie Vaughan is playing some really nice blues these days. I really do think Gary Clarke is doing some great work with his music. In fact, he's probably the only young black man in Austin doing blues right now. The others are doing all the rapping and that sort of thing. I guess otherwise, there's James Pope who still plays nice Jazz, but everyone's on the rock scene and all that don't really interest me.

Q. What are some future plans for Blues Boy Hubbard? Anymore gigs or anything of that nature?

A. Well, I'm going to be 70 years old very soon, and I can tell you that I've probably played more gigs than James Brown. After I got out of the Air Force and really started playing for a living, I'd play 6 to 10 gigs a week on piano. After a while, it became 7 to 10 gigs a week on guitar. So there isn't really much planned if anything.

Texas has produce some of the greatest blues singers, writers and musicians locally and nationally, T-Bone Walker, Blind Lemon Jefferson, ZuZu Bollin, Sam Lightnin' Hopkins, Sippie Wallace, Freddy King, Stevie and Jimmy Vaughn, Grey Ghost, Marcia Ball, W. C. Clark and others. Yet, so many of the behind the scene musicians, such as bassist Donald Cook, drummer Ben Turner, slide guitarist Hop Wilson, pianist Camille Howard who played behind so many of the great blues artists, has just faded away through death and time. Hubbard is one of the fading Texas Blues Scene Icon, which never got any real recognition. Many of his peers have passed on, leaving a legacy of music. If you every get a chance to see Hubbard, you will hear and see one of the greatest blues guitarist of our time.